SAN MARTIN, Calif. -- When Michelle Wie won the 2014 U.S. Women's Open at Pinehurst No. 2 Course, overcoming a hiccup on the 70th hole to become a major champion after plenty of chances, the conventional wisdom was that her victory would not only be a highlight, but a booster rocket to a new career orbit.

The conventional wisdom was wrong.

Two years later, on the eve of another U.S. Women's Open, after multiple injuries and missed cuts, Wie is a struggling golfer merely looking for a peek of good form.

Wie doing well this week at CordeValle, located about 45 minutes south of her alma mater, Stanford University, would be a feel-good story. But there aren't many reasons to feel good that such a plot will develop. 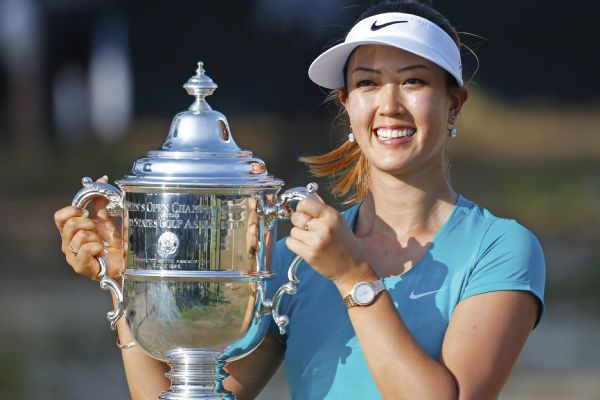 Sure, she is inspired by a return to the Bay Area. Yes, she says her health is better. True, she was 11th in last year's Open despite having to limp around Lancaster Country Club because of a bad ankle and hip. Any upsides, though, are offset by cold, hard golf facts.

Since withdrawing after 15 holes of the final round when she was 11 over for the day at the Swinging Skirts LPGA Classic in April, citing neck spasms, Wie has missed the cut in five events and finished outside the top 40 in two others.

"The list goes on," Wie said of her litany of health issues. "It's just been tough, you know, last year with my hip and everything. I had to change my swing so many times. And that's just been the main thing with me -- I just haven't had a consistent swing that I can [use] and play pain free. I've been tinkering so much to try to figure out how I can play without pain."

Well I knew I had not seen

Well I knew I had not seen Michelle's name on the leaderboard recently, but I didn't know her struggles where 40 weeks long.  That's too bad. Seeing her at that US Open win, I was hopeful she was turning the corner career wise.  But sounds like she's also had health related swing changes to deal with.  Maybe the David Toms 100 MPH swing is the way to go so you don't fight so many injuries...

I have to wonder about the way todays athelets go about exercising and workin out. Todays it's all too common for pro players to go in the injury list one or more times in a season. In baseball, it's not uncommon for a player to hurt his wrist while taking batting practice or hitting a ball during a game. I don't remember the last time one fo the Colorado Rockies best player played in every game of the season. Most of the time they miss 30 or more games a year due to injury. How many games did Cal Ripken play without missing a game?? Years worth from what I remember, NOT what we see today in sports.

Yeah, The Iron Man was

Yeah, The Iron Man was something you don't see now a days. I don't know what the balance is.  You need to be in shape to play quality golf throughout the season...so you need stamina, endurance, stretching, flexibilty.  Not sure how often Jack and Arnie went to the gym but I don't think it was a lot.  But today you have to compete with physical specimens today AND every tour event throughout the year.

I wonder how much Spieth is at the gym?  He's not chiseled as Jason Day seems or DJ even.

If I was to take a guess, I would have to say it's about being too Tight. Too strong and muscle bound for their own good.